Q&A with some of the Les Misérables team
by The Marionettes on July 7, 2014 in News 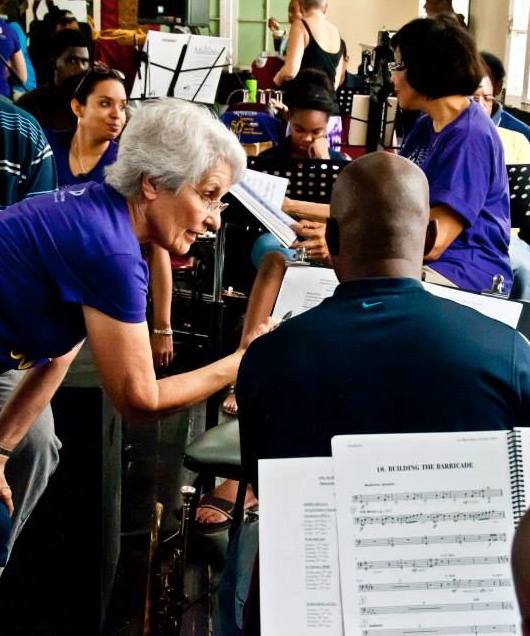 Caroline and Gretta Taylor share exchange commentary during a “Les Misérables” rehearsal, while Joanne Mendes consults with the orchestra in the foreground. Photo: Elliot Francois

Janine Charles-Farray of the Sunday Arts section of the Trinidad Guardian did a Q&A with director Caroline Taylor, musical director Gretta Taylor, and some members of the Les Misérbles cast. A link to the final article is below.

Janine Charles-Farray: What was your first reaction when the decision was made to do Les Mis next?

Caroline Taylor: It was actually a long time in coming. We’d done excerpts a few times over the years, and I personally spent much of the last decade trying to get the rights to do the full production here (as opposed the abridged student version, which was the only one available for licensing at the time). So when the full performance rights became available at the end of 2012, and despite the vast musical and technical challenges, it was all systems go. Once it finally happened, I was simultaneously excited and terrified!

JCF: How has the preparation for the acting in this musical been going in rehearsals?

CT: It’s been going well. They say half of directing is casting, and we have very strong leads, understudies and supporting cast. Some have acting training and/or experience, while others don’t. So while working on characterisation with each principal and soloist, I also try to introduce broad-based characterisation and stage craft techniques that everyone can benefit from, and that can help achieve full expression of the material from moment to moment and scene to scene, as much as the time permits.

JCF: In your role as Dramatic Director, what has it been like working with the overall talent involved in this production?

CT: I think it’s a real privilege. I really see it, in the broader sense, as a kind of midwifery. There’s something unique and beautiful gestating collectively and in each cast member, and I’m there to help them deliver a little magic to the world! It’s not always easy when you’re balancing all the variables of time and energy and space, trying to get things just right… But there is such amazing musical and dramatic talent, bringing this powerful material to life. Sometimes I see tears running down the faces of some of the leads during the more emotional numbers. Some chorus members have said they’ve started bringing tissues to rehearsals because the entire experience is so moving. Every so often, I look around and think: I’m part of a process of bringing one of the most powerful pieces of musical theatre I’ve ever experienced to a local audience. We’re all in this together, working toward this common goal, trying to spread some love and joy and light during some dark times in this place and space. Like a lot of our team, I don’t get paid a cent for the work I do. But the intangible rewards are boundless, and I’m grateful for that.

JCF: Will the thematic and artistic elements remain distinctly Victorian, or will there be any “Trinidadianizing” liberties taken with the lyrics or treatment?

CT: The show is actually set just after the First French Empire under Napoleon, and spans four French locations over just under 20 years. The Victorian era, by contrast, was specifically British and actually began after the action of Les Mis concludes. The license for the show is incredibly restrictive, so we aren’t allowed to change any of the lyrics or setting and our creative team therefore uses that as our base. However, this will also be the first full production, to my knowledge, that uses the steel pan in the orchestra pit, alongside strings, brass, woodwinds and percussion. Most of all, though, Les Mis has in many ways become the world’s musical, and like each production, we are looking to do it in our own distinctive way…one which will have an inescapably Trini style to it, for sure!

JCF: What do you hope local audiences will ‘get’ from this Les Mis production?

CT: Les Mis is such a powerful and entertaining piece of work. It runs the gamut of human emotion, and covers such universal themes — love, war, justice, faith… There’s a reason the material from a 2,000 page book has been adapted into numerous forms, including comic books, several movies, and of course both a stage and screen musical. It’s a really moving, entertaining and life-affirming work. And what I hope our audience leaves with — other than recognising how much artistic talent we have here, and how much we need to develop our cultural industries to support that talent — is that every time we choose love and hope over hate, or violence, or fear, we make a meaningful shift in the world for the better.

CT: Marionettes has always been like an extended family for me. But beyond that, even though I was in and out of the country for a while and sometimes taking time out to work on other creative projects, I think the level of my involvement now on the creative and administrative side is in large part because of the kind of relationship I have with my mother. Back in 2008, my aunt, mum’s only sister, passed suddenly weeks before our “Tributes” concert. It was heartbreaking to see the toll it took on Mum, and I felt very much compelled to take up more of the creative mantle to support both her and the work. Sadly, this production is a bit of a parallel as her only brother passed last week, once again just weeks before concert time. So at the end of the day, while we face the same challenges any two family members or members of a creative team do, we’re both driven to manifest something beautiful on that stage, and to support each other in the process.

JCF: What do think of  Schönberg’s music from this musical?

Gretta Taylor: The music is special: tuneful, memorable, anything but sugary and superficial. Not predictable. Some very challenging recitatives, motifs. I think it should be compared to opera/operetta, as there’s no speaking, only singing.

JCF: Are there any show stopping pieces in particular to which the audience can look forward?

GT: It’s perhaps the most challenging production Marionettes have ever undertaken, Carmen included!

JCF: Please list three words to describe your reaction to being selected to play your role in this production of Les Mis. 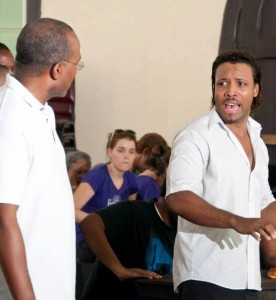 JCF: Of your pieces, which is your favourite or which do you look forward to performing on stage most?

MDB: “What Have I Done?” better known as “Valjean’s Soliloquy” – musically it sits well in my vocal and dramatic gifts and extremely challenging yet fulfilling for the vocal ammunition I may posses.  Dramatically its really a very spiritual number, filled with angst and passion but  personal and revealing.  This piece comes right after he steals the silver from the Bishop’s house, his arrest by the police and his subsequent pardon by the Bishop, imploring him to take this opportunity to change his life.  It reminds me of similar spiritual experiences in my own life and allows for alot of introspection, purging of  ill thoughts and opening one’s heart to receive the blessings of a better life.  As an actor it allows for a good set up albeit not an easy one, to demonstrate the transformation that has occurred over the years before the character appears in Act 1. 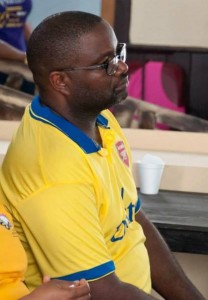 NF: I love singing “Who am I” because it speaks to the essential conflict of Valjean a central character and is a recurring motif running right through the musical.

DW: “A Heart Full Of Love” is my favorite piece to perform. It brillantly captures that moment when your heart and soul have awakened to love for the first time in way that is simultaneously reckless, free, passionate, pure, innocent; and suddenly everything in your world make sense. The music is breathtaking and composer very cleverly weaves together the stories of three characters into this one beautiful piece.

Some of these interviews were woven into Janine’s final piece: “Staging Les Mis: a long journey” (Sunday 6 July)