“Pans and Choir in Some Enchanted Evening” (Trinidad Guardian, 1968)
by The Marionettes on August 12, 2020 in News 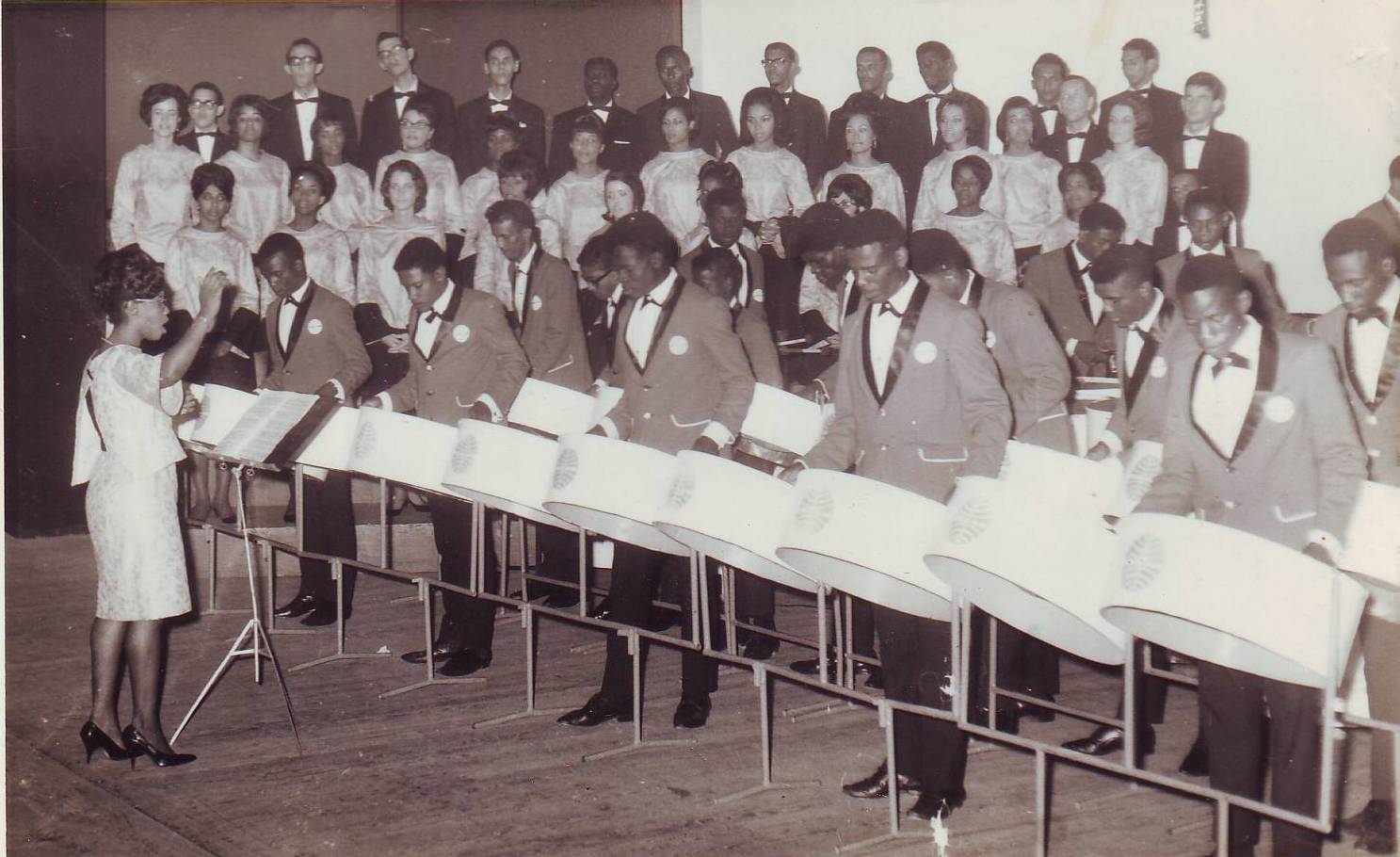 Trinidad culture has just scored one of its biggest breakthroughs.

The milestone was reached on Saturday night at Queen’s Hall when Pan Am Jet North Stars joined with the Marionettes Chorale in a steelband and choral recital.

It was unquestionably the most successful event to date in the Trinidad & Tobago Festival 1968 programme.

And if fault must be found, then surely it is in the fact that the recital left the insatiable audience shouting for “More.” Even after the National Anthem had been played.

The recital featured the groups individuals and together on several standard and classical pieces.

Having them together was an experiment which clicked so smoothly that one was left to wonder: why was it not done on such a grand scale before?

But then, only Marionettes and Pan Am could have served the sort of richly-flavoured menu which the city audience digested with such relish.

They are the champions of champions. They are the pace setters. Now others will follow and from now on, the sky is the limit.

The recital began on a high note, and a rich note, with one of Strauss’ best known and most beautiful waltzes “Voices of Spring”.

It took a long time for the applause to die, for this was one of the real gems of the night. And when it did, the groups were again scoring with Rogers-Hammerstein’s “Some Enchanted Evening.”

On this, and some of the other selections which followed, Marionettes dominated, with the steelband providing fairly straight background music, but with striking effect. And this had nothing to do with the novelty of it.

The fear that distortions from the bass pans would have drowned out the voices proved groundless. Better harmonisations one could hardly have desired.

Marionettes male voices took over after the two opening numbers, and endeared themselves to the audience with throaty renditions of “So Deep Is The Night” and the “Galloping Major”.

When the female voices came on they maintained the standard with “The Song and the Angels Sing,” and a rhythmic “In a Little Spanish Town”.

Male and female voices joined for a spirited rendition of an old favourite “Ma, He’s Making Eyes at Me,” which went down even better.

Voices and pan came together for Romberg’s “Softly As In the Morning Sunrise” and Cole Porter’s “In the Still of the Night,” which brought the first half of the show to an end.

Pan Am kicked off the second half with a tango, changed tempo with “The Shadow of Your Smile,” switched again for Gershwin’s “Bess, You Is My Woman Now,” and then came back home with an exciting arrangement of Sparrow’s “Mr. Walker”.

Then the panmen came on with Tchaikovsky’s “Sleeping Beauty” waltz, and it left no room for argument as to which as the country’s greatest steelband. 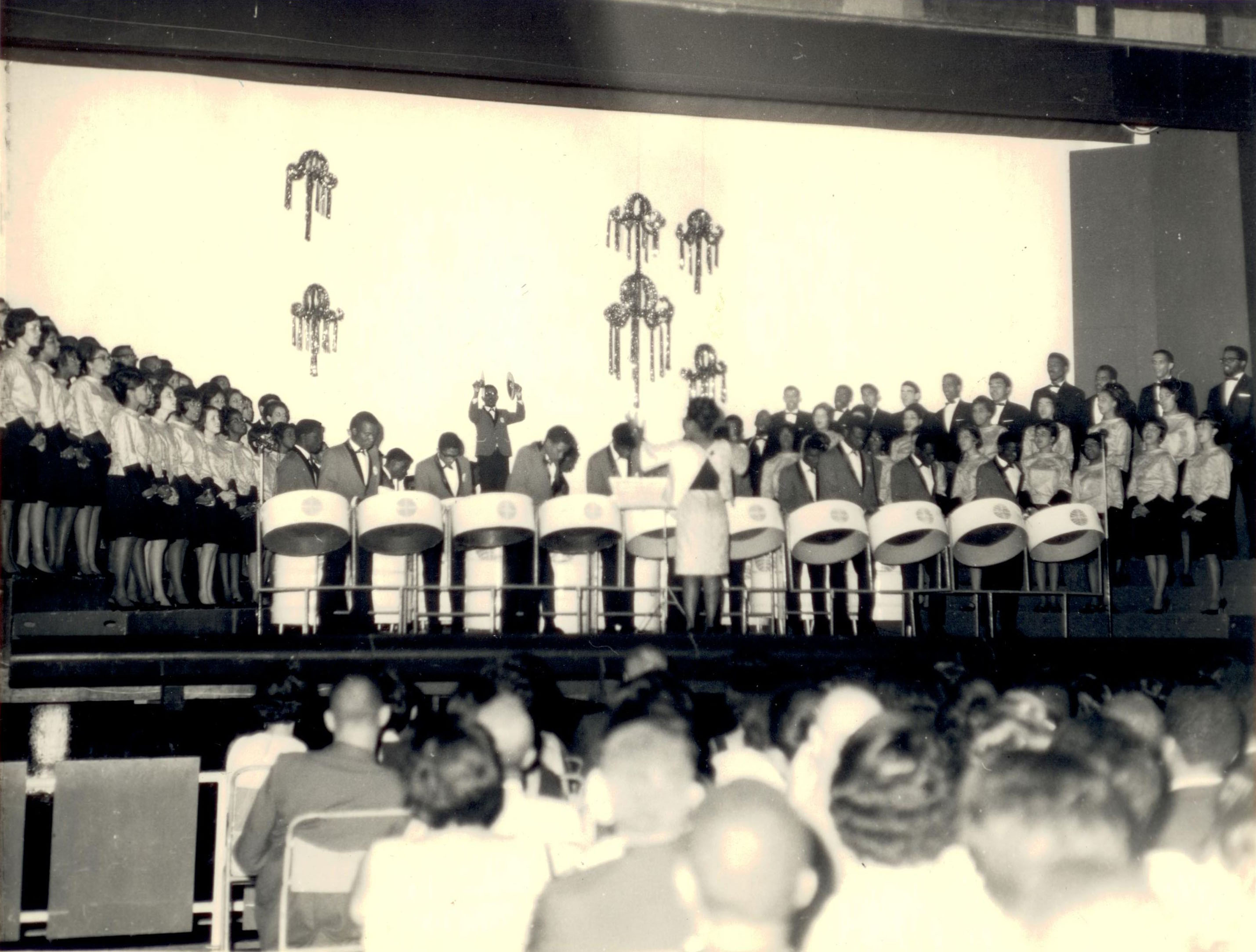 And Anthony Williams’ (Pan Am’s leader) stock went up as one of the truly versatile arrangers in the business.

More voices and pan — this time “Poet and Peasants.” [sic] And this was the real high point of the night. Theirs was a rendition which is hardly ever to be duplicated, or surpassed.

Hammerstein’s “Oklahoma,” the last item, proved almost too much. The audience went wild. The audience cheered lustily, and shouted — for more — a lagniappe. And it got just that, an equally spirited repeat of “Oklahoma.”

And there is was — the most two exciting hours any concert lover could have hoped to spend.

The show, sponsored by Geo. F. Huggins and Alston’s Limited, was repeated on Sunday night with equal success.

Marionettes’ leader, Miss Jocelyn Pierre, said recently that now the two groups had come together, she hoped to keep the relationship as close as possible. 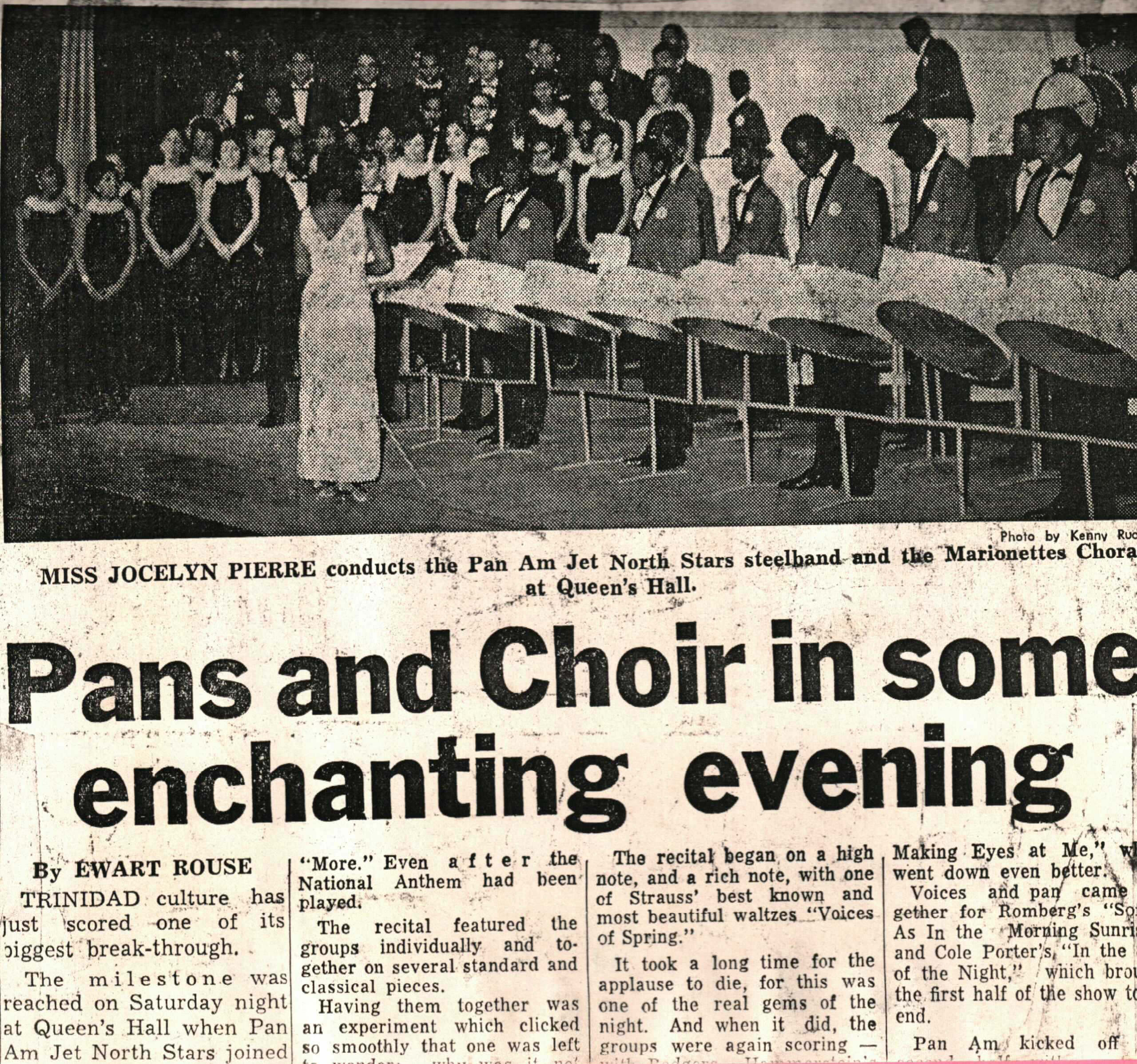 “Pan and Choir in Some Enchanted Evening”, Trinidad Guardian, July 1968