Search
A message from Gretta Taylor for “I Dream a World”
by The Marionettes on December 3, 2017 in News 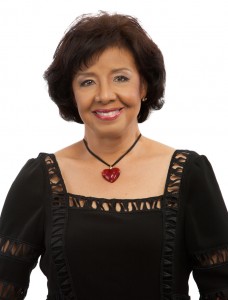 We can dream, can’t we? Dream about a better world? Although many of the positive values of the past sometimes seem to have gone for good, we can still envisage and work toward a world characterised by love and caring, rather than by greed, prejudice, and hypocrisy. For many of us, that hope involves faith in a superior being (reflected in some of tonight’s numbers like I believe, and God help the outcasts), and being the change we want to see (If I can help somebody).

We’re proud to pay tribute tonight to Calypso Rose, who made Trinidad & Tobago proud when her album Far from home won the World Music Album of the Year Award at this year’s Les Victoires de la Musique, the French equivalent of the Grammys. Tonight we perform Desmond Waithe’s arrangement of her hit Leave me alone from that collection — a song that, while lively and infectious, also delivers a powerful and timely message.

Our young singers will surely entertain you with Someone in the crowd, from the award-winning movie musical La La Land, conducted by our Assistant Musical Director Dr Roger Henry. Another highlight for us tonight is the classic hit song Africa (Thunderstorm), made popular by the rock band Toto, and which the Senior Chorale will be performing. The initial idea and lyrics came from Toto’s David Paich who, moved by a harrowing late-night television documentary, felt compelled to put his feelings into song.

Also on the programme is the rhythmic and beautiful Baba Yetu, the Lord’s Prayer in Swahili — the first video game theme song to win a Grammy (2011). It won several other awards for composer Christopher Tin, and has been performed all over the world. And, of course, we’re singing plenty of seasonal music tonight to put you in the Christmas spirit!

Our heartfelt gratitude goes to everyone who helped with the preparations for I dream a world, including Joanne, Jacqueline, Caroline, Roger, Michelle, Judith, Wendy, and Desmond. A special word of appreciation to our dear Noble; and to Brenda, Carmen, and the parents and adult choir members who continue selflessly to help us with the youth choirs’ rehearsals on Saturdays.

Of course we cannot thank enough our invaluable sponsors: Flow Trinidad & Tobago, the Caribbean New Media Group (Sweet 100.1FM, TalkCity 91.1FM, and CTV), and our title sponsor since 1972 BP Trinidad & Tobago (bpTT). Without them there would be no show, and we certainly wouldn’t have been able to raise over $500,000 for worthy charities over 12 performances in the last 18 months. Last but not least, our thanks and deepest appreciation to every member of our audience. You make it all worthwhile.