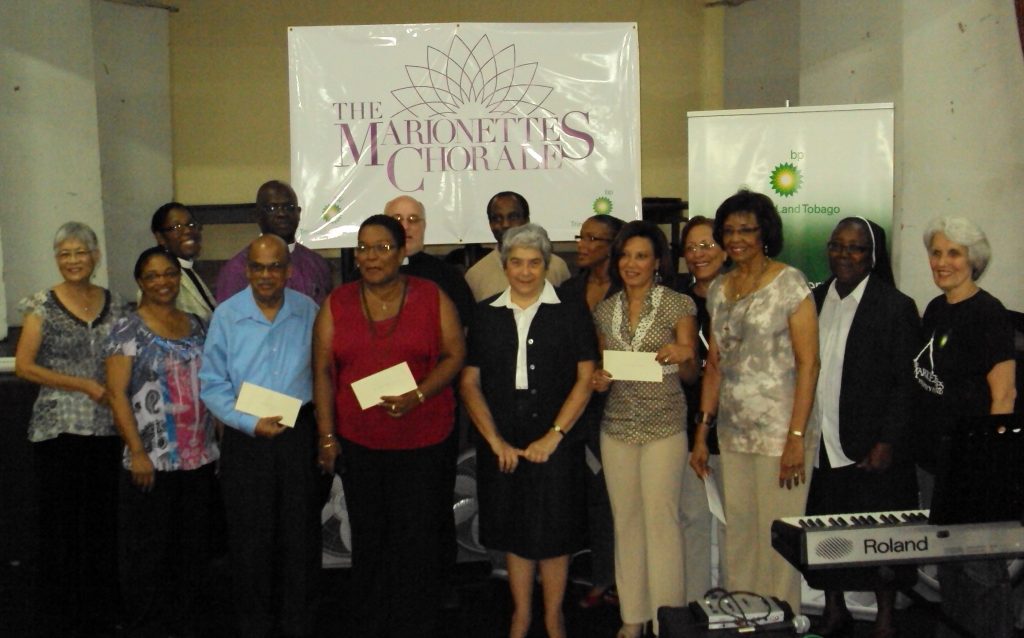 All our wonderful friends from the the Archbishop's Appeal (for the restoration of the Cathedral of the Immaculate Conception), All Saints Church's rebuilding fund; the Greyfriars St. Ann's Church of Scotland rebuilding fund; the Sisters of Cluny's rebuilding fund for the La Madeleine Orphanage in Haiti; the LoveUntil Foundation's countless community programmes in Laventille; and the Marionettes Property Fund!

The Marionettes concluded a historic year – including our celebrated stagings of Carmen and A Prayer for Peace II, but also the country’s state of emergency and curfew – with a renewed commitment to being the change we wanted to see in Trinidad & Tobago.

Over the last five years, the Marionettes – with support from sponsors of 40 years, bpTT – have raised over TT$1 million for a wide range of causes, including hurricane relief efforts, cancer treatment and prevention, mentoring programmes for at-risk youth, support for the victims of domestic violence, and care for the terminally ill.

Though we have our own urgent expenses, first and foremost our campaign to construct our own home, we strove to raise as large a sum as possible for other outstanding charities at our last Christmas series. The series raised nearly TT$200,000, which was equally distributed among six important charities:

The cheques were distributed at a special gathering earlier this month, where the choir serenaded their specially invited non-profit partners with music from their upcoming series, A Gift for the Nation II, and then broke for a sharing of food and drink.

Addressing the gathering, Artistic Director and Conductor Gretta Taylor explained how important the evening was to the group: “The organisations you represent have played a valuable part in the Marionettes’ journey. We are a musical family, now almost 50 years old, which has earned acceptance in the wider community for what we aspire to: spiritual enrichment through performing fine music as well as we possibly can.”

She also paid tribute to sponsors of 40 years, bpTT, whose support is instrumental to the choir’s musical and community work. “Without bpTT, whose subvention covers a generous proportion of our expenses, we would be permanently in the red, and probably in jail,” joked Taylor to laughs from the audience. “So we are extremely grateful to bpTT for their unstinting support over the past 40 years. From the bottom of our hearts, thank you.”

The Marionettes’ community work has continued this year, with a special emphasis on nurturing young talent in Trinidad & Tobago. In the past, the Marionettes have collaborated with many children’s choirs, including those of Sacred Heart Girls, Maria Regina, and St. Monica’s. In 1995, the choir also founded its own Youth Chorale for post-SEA students – with a few notable exceptions like the young and talented Timel Rivas.

However, the critical issues facing the nation’s vulnerable young people and the display of talent from primary schools at the last Music Festival prompted the Marionettes’ leadership to open their doors to children eight years and up. The 50-odd vivacious and talented youngsters who were accepted after the auditions make their debut at the Queen’s Hall this 14th and 15th July, when the Marionettes present A Gift to the Nation II.

For all the photos from the donation event, visit our Facebook page’s album here!