CARMEN Broadcast Schedule
by The Marionettes on July 24, 2011 in News 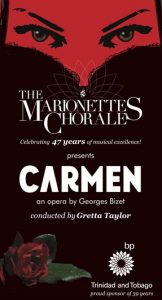 The Marionettes production of Bizet’s Carmen debuted at the Queen’s Hall earlier this month, to rave reviews and sold out audiences. Critics hailed the production as “one of the best theatre productions this year [with] masterful performances” (The Guardian); “entertaining and well done” (The Express); and “a truly wonderful evening of music” (The Newsday). Here’s your chance to see it again, or get a taste of the Carmen experience for the first time!

Additional broadcast dates of both casts
will be posted as we know them.