And we open tonight with A Prayer for Peace II!
by Caroline Taylor on December 2, 2011 in News 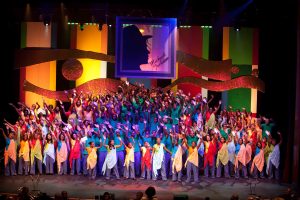 The day is here! We weren’t sure it would come, or when…!

This year has been boldly taking risks and having faith. We began the year, trying to prepare for Carmen, with no rehearsal space. After staging the show against all odds, Trinidad & Tobago’s state of emergency was called before we even started rehearsals in September for our holiday series. The 9pm curfew cast doubt on whether we would even be able to rehearse at all. It was only when it was shifted to 11pm in early September that we were able to take the decision to start our rehearsals earlier, and begin to contemplate our Christmas series.

Given the turmoil and upheaval around the world for which 2011 is sure to be remembered, we decided to revisit a concert format we first presented in 2001 after the events of 11 September in New York. Once again, we planned to visit communities across the islands spreading music and messages of hope, renewal and peace. This year, perhaps more than ever before, we wanted to usher in a spirit of peace, joy, forgiveness and thanksgiving.

Once again, however, the state of emergency and curfew proved very tricky. We planned to do two weekends in communities nationwide, but found it almost impossible to schedule concerts around the curfew, existing bookings at many venues, and weekend religious services. In the end, we even had to cancel the performance in San Fernando at the one church we were able to confirm for 11 December, as it clashed with the concert series of our friends the Southernaires. (Additionally, just as we were going to press with our tickets and posters for performances planned around the 11pm curfew and Queen’s Hall’s 8pm cut-off time, the curfew was lifted and we had to re-think and re-do all the artwork!)

Since the entire series would now be in Queen’s Hall, we decided to modify the “lessons and carols” format of the first Prayer for Peace, and instead include not only religious texts but quotes from leading humanitarian figures like Mother Theresa and the always-timely words of T&T’s finest calypsonians, to bring the message home. We also were delighted to welcome the award-winning talent of Cecilia Salazar to deliver these messages, giving even greater depth and context to the music in the programme. We were also grateful to veteran journalist Jeremy Taylor, who was instrumental in the selection and sequencing of these found texts.

But one thing is for sure: our audiences always tell us that “Christmas begins with the Marionettes“, even going so far as to say that if they miss the concert, the Christmas is never the same! We are humbled and honoured to be a part of so many people’s annual Christmas tradition, and as always hope to uplift them with classical, spiritual, gospel, popular Christmas favourites, parang and more.

As always, the Marionettes’ artistic ambitions and commitment to excellence and community are supported invaluably by BP Trinidad & Tobago, who also sponsor our special charity matinée, a free performance for senior citizens and children from institutions across the island which care for some of our society’s most vulnerable. It is their support which has also allowed us to have raised over TT$1 million for NGOs and their work in cancer treatment, hospice care, programmes for at-risk youth, hurricane relief and more.

This year, with so much work to be done in our communities – both here in Trinidad and Tobago and regionally – we decided to raise funds not just for one but for six charities. All proceeds from A Prayer for Peace II will benefit the LoveUntil Foundation; the La Madeleine Orphanage in Haiti; the Cathedral for the Immaculate Conception; All Saints Church renovation fund; the Greyfriars/St. Ann’s Church of Scotland; and the Marionettes’ own Property Fund.

For those of you who have already bought your tickets (our production manager Joanne Mendes always said if we could have seven Sundays in a week, we’d sell out instantly, such is the rush for the Sunday tickets!), thank-you! There are a limited number of tickets still available for tonight. They are $200 (reserved) and $150 (open plan), on sale from the Marionettes (email@marionetteschorale.com or 790-1751); online at https://marionettes-christmas.eventbrite.com; and at the Queen’s Hall Box Office (tel: 624-1284).

Thank-you as always for your support, and we look forwarding to moving you with the music this weekend!